So often misunderstood, the differences between Simplex and Duplex Radio communications is worth studying.

Duplex – Duplex operation means that a radio station transmits on one frequency and receives on a different frequency.

Full Duplex – Operating duplex with the ability to transmit and receive simultaneously. 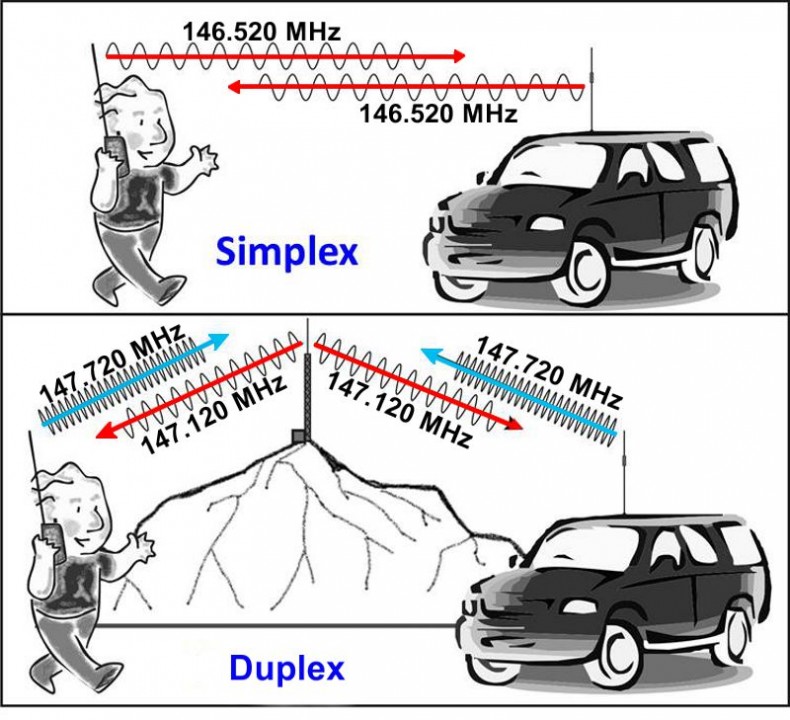 Examples of simplex vs. duplex operations. The repeater station (lower image, on-mountain) is full-duplex, instantly retransmitting a received signal. Each user’s station is half-duplex, unable to transmit and receive simultaneously, but shifting between the transmit and receive frequencies.

Very often simplex and duplex operation are associated with FM on the VHF and UHF bands. If you are talking to another ham directly, on one frequency, with no repeater involved, that is simplex operation.

FM repeater operation uses two frequencies: the repeater receive frequency and the repeater transmit frequency. The repeater’s job is to take the signal it hears on its receiver and retransmit it on the transmit frequency. See this article for more information on how repeaters work. Repeaters operate in full-duplex mode because they receive and transmit at the same time. The repeater user is usually operating in half-duplex, using two frequencies but switching between transmit and receive. Some FM ham radio gear can operate in full-duplex mode (usually employing two different ham bands) but most equipment is half-duplex only.

The vast majority of HF operation is simplex operation. We dial up a particular frequency and chat back and forth on that same frequency. However, duplex operating is also used on HF, typically referred to as working split.

Illustration of split operations with a DX station.

Illustration of split operations with a DX station.

to listen on a different frequency, typically a few kHz up from his transmit frequency. The DX operator will say something like “listening up 10” to indicate he is listening 10 kHz higher than his transmit frequency. Or he may just say his receive frequency explicitly (“listening 14.180”). The idea is that the DX transmit frequency will always remain clear so everyone can hear him. Everyone hears the DX pull a callsign out of the pile, when the contact is complete and when he’s ready for the next call. Things get easier for the DX station as the calling stations tend to spread out and he can tune around a bit to find a particular station he wants to contact. See this Question of the Week article for more on HF split ops.

Most modern transceivers have split mode capability with dual VFOs. The red arrow points to the split button on this Kenwood transceiver.

On the HF bands, split operation is an example of half-duplex operation. I suppose it could be full-duplex under some circumstances but in most cases transmit and receive will not be simultaneous.

Excluding FM repeater use, most VHF and UHF operating is also simplex. VHF operators can operate split just like the HF case but I can’t recall actually hearing this on the air. A strong band opening on 6m behaves a lot like HF, so a large DX pileup could benefit from going duplex.

Satellites use one ham band for the uplink and another ham band for the downlink. For example, the FO-29 satellite uses 145.9 – 146.0 MHz for the uplink and 435.8 – 435.9 MHz for the downlink. Similar to a repeater, the satellite operates full-duplex, transmitting the signal that is heard on the receiver (uplink). Ham satellites use different modulation types, including FM, SSB, CW and digital formats. It is the most common example of “non-simplex” SSB operating on the VHF bands.

Satellite duplex operations can be conducted with an HT and a dual-band antenna, usually a directional. Here a user operates half-duplex, using a 2m/70cm dual-band Yagi to make a satellite contact. The satellite, like a repeater, typically operates full-duplex to instantly retransmit on one band signals received on the other.

It is highly desirable for the satellite user to also operate full-duplex (usually with headphones to avoid feedback). That way, the user can determine how well he is getting into the satellite, operate with minimum power and just do a better job of avoiding interference to other users. The FM birds can be worked with just a handheld transceiver (HT), making portable operating easy. However, only a few HTs have the ability to operate full-duplex, so a lot of satellite operating is done using half-duplex.

To wrap up then, simplex is a term that applies to all of the ham bands, because it is the simplest way to communicate. However, it is not the “opposite” of using a repeater. Duplex is also a term that applies in a variety of cases, including repeater operation, working split on HF or VHF and working crossband via satellite.